In his work, Rick seeks out-of-the-box solutions as he turns challenging parcels into quality developments that preserve maximum available greenspace and trees. Rick’s negotiation skills enable him to achieve successful outcomes acceptable to all parties—neighborhoods, developers and staff of local governments. Then, he shepherds projects requiring zoning changes through city staffs, P&Zs and councils in the region and beyond. His ability to identify avenues for compromise have served him well in many arenas, including development.

Rick has served on the City of Denton Zoning Board of Adjustment and two City of Denton citizen Tree Ordinance committees. He is fluent in Spanish and has traveled extensively for business in Central America and South America. Rick holds a bachelor’s degree from the University of North Texas, is a graduate of Denton High School and earned Eagle Scout designation.

Rick was 1 year old when his father, a pilot, joined the National Guard and trained as a fighter pilot. When Rick was in the fourth grade, his dad left the Guard and the family settled in Denton. Rick attended Robert E. Lee Elementary School and Congress Junior High School and was graduated from Denton High School, then spent two years in Central America learning the language and customs.

Rick attended college out of state and worked in construction during the summers, but married and left school after the first year to work primarily in sales. Jobs included those for NAPA Auto Parts and a luxury/foreign car dealership, where he soon became the top salesman, and as a solicitor of investors in real estate projects.

Nearly 10 years later, Rick and his wife returned to Texas for the birth of his first son. He went to work for Andrews Corporation, a manufacturer of telecommunications hardware that was housed in the building that today hosts Flowers Bakery.

Leveraging a variety of skills acquired along the way, Rick also began landscaping and building outdoor enhancements, including patios, outdoor kitchens and gazebos, and he obtained a license to install sprinkler systems. These soon became his full-time business.

In the early 1980s, H. Ross Perot undertook a significant expansion of the Electronic Data Systems (EDS) corporate campus. Rick supervised four landscape crews working on that and other projects in the Metroplex. One weekend, he and his 32-member crew planted 8,000 plants at the Plano site, including 100-gal trees planted indoors. He then created and supervised plans for watering and maintenance of all plants at the EDS site in Plano.

When EDS sold in 1984 to General Motors, which promptly tightened the corporate belt, Rick took a job handling business-to-business (B2B) sales of high-end copiers for a Dallas firm, then transitioned into B2B sales of copiers to dealers throughout Central and South America. As Rick was the only person in both companies who spoke fluent Spanish, he served as the interface between the companies and their dealer networks.

Rick soon joined a firm selling backup-power supplies to computer vendors in Argentina, Chile, Peru, Costa Rico, El Salvador, Guatemala and Nicaragua. However, Rick found the payment process very slow, and he refused to participate in bribing, a shadowy, but common, element of doing business at the time.

In the late 1990s, Rick became proficient in AutoCAD and changed careers. His first project, design of a 450-acre subdivision for a Denton landowner originally from Argentina, tapped his fluency in Spanish. They worked together on several other projects in Denton County.

Rick then reconnected briefly to his contacts south of the border and learned that officials of some Mexican states wanted to computerize birth, marriage, divorce and death records in an effort to identify eligible voters. Rick designed a self-powered, air conditioned, portable trailer in which municipal records could be dehumidified, indexed and scanned. Before the project could be launched, however, the official with whom he was working was indicted, and the project ended abruptly.

In 2005, Rick returned to college, where he studied geographical information systems and history part-time while working as a land planner, doing site design and representing developers seeking zoning changes around the Metroplex. Six year later Rick earned his bachelor’s degree at UNT after much perseverance.

Today, Rick employs well-honed sales and negotiating skills as he works with neighborhoods, developers and local government staff on specific elements of site plans. His goal always is achieving successful outcomes acceptable to all parties. Because the development process in some cities is long and convoluted, and time is money to developers, Rick’s ability to identify and promote avenues for compromise early in the process is valuable.

Rick specializes in design of “problem tracts,” sites with features that make them difficult to develop, and zoning change requests. At present, he enjoys a near-perfect success rate in shepherding projects through city planning processes in the Metroplex and beyond.

Rick has served on the City of Denton Zoning Board of Adjustment and two City of Denton citizen Tree Ordinance committees, with extended service as a citizen volunteer working on the recently approved new Denton Development Code. He is fluent in Spanish and has traveled extensively for business in Central America and South America. Rick holds a bachelor’s degree from the University of North Texas, is a graduate of Denton High School and earned Eagle Scout designation. 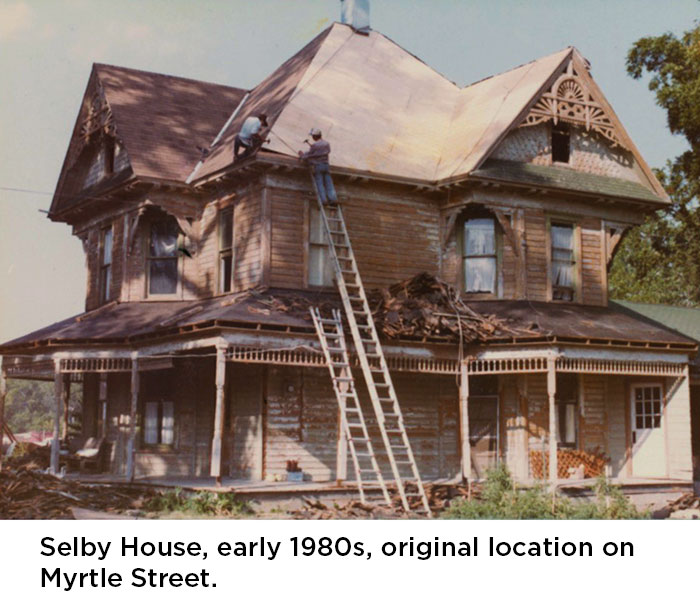 Living in a Denton Treasure

In the early 1980s, Rick moved into the house we know today as the Bayless-Selby House Museum and launched a five-year, basic restoration. A decade prior, in 1970, Rick’s parents had bought the large, 2-story Victorian homestead on Myrtle Street from the heirs of R.L. Selby and his wife Mary, long-time owners of Selby nursery, located on land adjoining the house, and Selby Florist, located where the Greenhouse restaurant today.

A bit of history: The original Bayless-Selby house was built sometime after 1885 as a two-room home; Samuel Bayless expanded it into a two-story Victorian in 1898, the year after the Courthouse-On-The-Square was completed. A comprehensive history of the house is here.

With no eye to restoration, Rick’s parents converted the house into an antique shop, which his mother owned and managed. In doing so, they made many internal alterations to the building, but did not change its basic structure.

After his parents closed the antique shop, Rick assumed responsibility for the property and moved his family into it. The house was in desperate need of basic structural maintenance and support, which Rick undertook prior to tackling any cosmetic restoration. Although his father had tried to brace the leaky house with railroad ties and lally columns, much remained to be done. 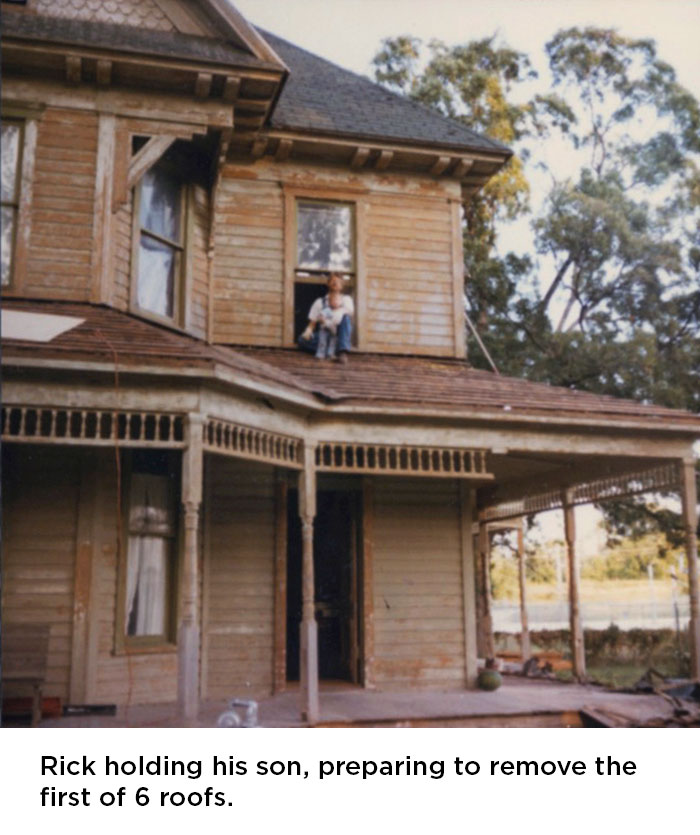 An especially daunting task was installation of a new roof. Rick removed six layers of shingles – 10 dump-truck loads – before he could replace the roof. (Adding new roofs over old ones was common during much of the 20th century.) Rick also reinforced the attic floor and stabilized the frame of the house, which was heated by a furnace and four space heaters. The house was well-shaded, but the nursery was the only air-conditioned room; it had one window unit. Two of Rick’s four children were born while his family lived in the Selby house.

After five years, Rick could see that the full restoration he initially envisioned would take far more time, energy and dollars than were within his means, so he returned the house to his father and, with the help of his brother, set about building his own home on then-unincorporated land east of Denton.

When the general contractor for the Bayless-Selby House restoration began work on the house, he noted the house probably would not have survived the move from Myrtle St. to its current home without the creative solutions Rick devised to stabilize the structure. 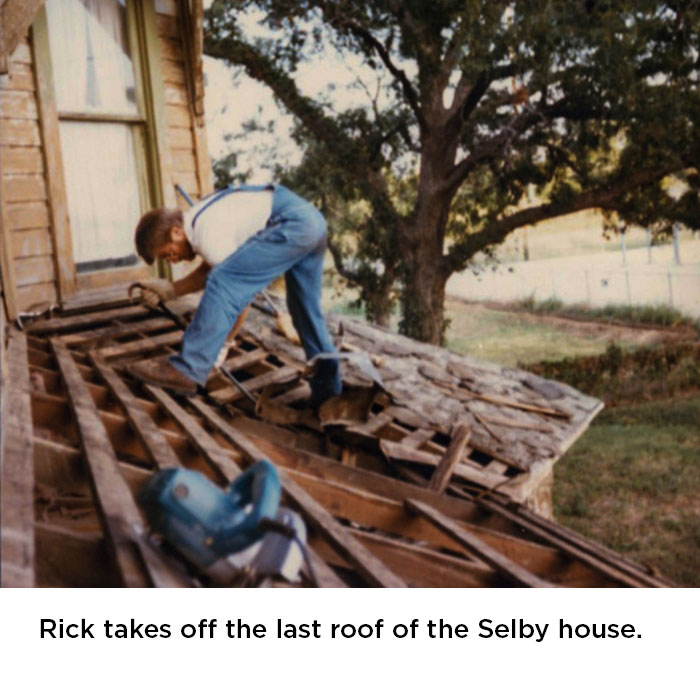